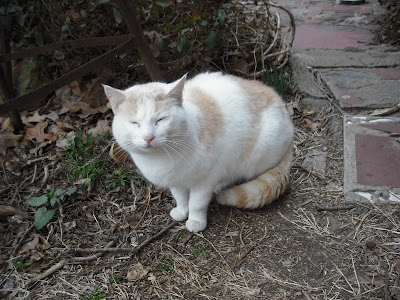 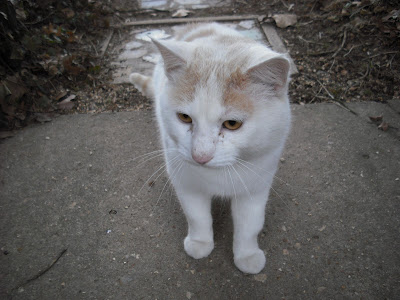 Goofy is from the Humane Society. They made him a wonderful cat 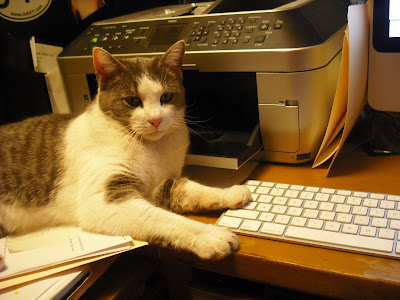 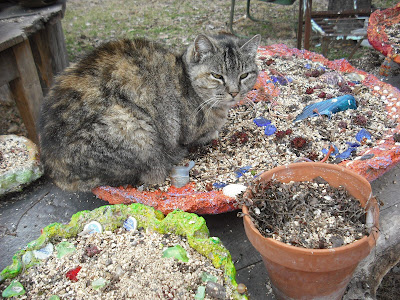 Another male neutered. That’s a good thing. But WHY does it have to be on my watch/dime? We have enough critters to take care of: a parrot (Abby aka Toots); Molly (the world’s fussiest former starveling); the cat duo: MamaCat, Goofy. Then there are the wild things. Peripherally-cared for critters are why we call it Hungry Holler. Every creature who enters our wrinkle in the Universe is hungry. We feed the birds. This isn’t totally or even primarily altruistic. Bird watching is one of life’s great pleasures especially when you live in the species-rich environment that is rural northeast Oklahoma. Black oil sunflower seeds. That’s all we feed, and the odd geriatric fruit, vegetable or bread-stuff uncovered in the kitchen.

The compost heap is popular with possums, raccoons, armadillos. One life connected to another. This is getting waaay deep and I’m off subject which is: yet another cat brought into the tribe.
We tried to be indifferent. Occasionally we’d see a white/orange blur run across the compound. Gradually its hiney became familiar fading into the dark. We began to see it lounging on a chair in front of the Holler’s Cottage Gallery. It became less hyper-freaky, holding its ground when we got within stone-throwing distance. Not that we ever threw a stone. Maybe once or twice but not aimed to hit, only to hit close. And only because its presence riled the other two.
I caught it in my shop a few times. Those who follow this blog know my shop (studio) is plagued by animal intruders (see coon postings). One fateful morning as I came out to feed, it was sitting on the bench under my shop windows. I greeted it without thinking and put my finger out God giving life to Adam-like and it was over. It became Punkin and that’s why I went to Jay yesterday and made arrangements with Ritchie Stover DVM to have him neutered. Dangit. I can’t rubberband his testicles and wait for them to atrophy. Or put him head down in a boot and slice. Believe it or not, these suggestions were offered by folks who see no sense in spending good money on a found cat. Don’t hold it against them. It’s easier to be sanctimonious about evolved animal attitudes when you don’t have to decide whether to buy milk or keep the lights on.
So, meet Punkin. The cat duo is now a trio. Or will be sometime next week. I still gotta get Punkin in the animal carrier. Stay tuned.