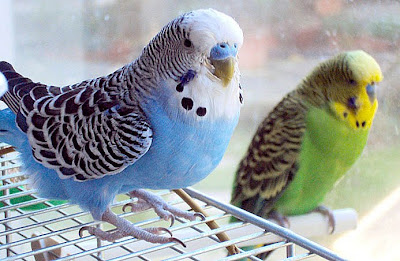 This is BlueBird and his roomie Tallulah. Together they lived in West Sussex, England. BlueBird was a powerful little creature. He brought together his English family, an animal healer in AZ (that would be my sister Juls), and–peripherally–an Oklahoma artist (that would be me).
BlueBird is named not for his color (that would be trite) but for a line in the the K.S. Rhoads song, Dark Hotel. 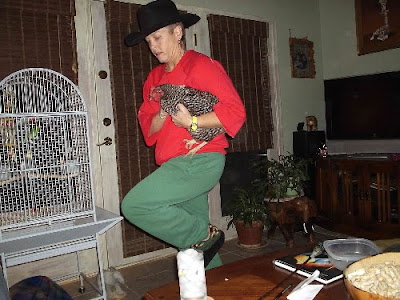 This is my sister Juls dancing
with her hen Ms. Henrietta

English Mark is my cyber penpal. We discuss heavy stuff like health care in England vs health care in the US, garden vs yard meaning the same thing, and Search Engine Optimization of which Mark is an expert. His family (wife Elaine, daughters Chloe and Isabel) shares my family’s love of animals. Which led to an email exchange in early February that mentioned the family budgie (that would be BlueBird) was not feeling well. Thus began among us, copious email exchanges including photographs of the patient, graphic descriptions of healthy bird poop (that would be poo in English) and not, Juls’ input and advice, reports from trips to the veterinarian, results from online research, and the ordering of a special aloe detox preparation from the States, sent as quick as money will induce. The family sprouted seeds for a more liver-friendly diet.

It was in vain. BlueBird succumbed to apparent avian liver disease in late March. That he lived so long with so dire an ailment is testament to what a tough little nut he was, and how well loved. Hearts were broken on both sides of the ocean (that would be the Atlantic). 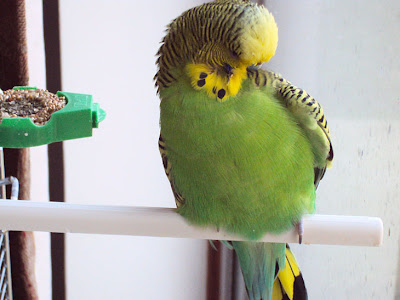 Talluluah (whom we now call Mr. T, thanks to the observant vet who examined both birds) comforted his cagemate through his illness. A warm-hearted snogfest (that would be English for cuddling and grooming) is salutary among all species. Mr. T receives extra rations of attention, grooms himself, and is coping well.
BlueBird was laid to rest in the family garden (that would be yard in American) beneath a huge sycamore, next to Br’er Thumper (that would be a rabbit), and cats Harry and Lottie. Among the family tokens of affection there stood a peach-colored rose in the name of Juls and Jan.
Jan Meng2010-04-29T04:30:00+00:00