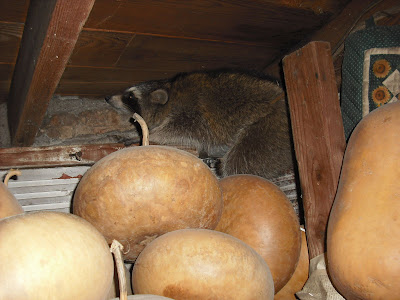 I have been in and out of my shop. The coon, alas, has only been IN. At one point, I was fooled again…what does that say about ME? I thought he was gone. He wasn’t. He was curled up in one of my tubs of bottle caps. Yes. I have multiple tubs of bottle caps, sorted as to color. What of it?
The tub was next to the open window. I slowly pulled the tub forward, even with the window, and gently poked the creature with a yardstick. Instead of exiting stage right, he flowed over the back of the tub, behind the table the tub was sitting on, and miraculously wound up in my gourd shelves again.
Friends have suggested the following:
Russell Studebaker World Famous Horticulturalist, Pasha of Poultry and my garden mentor: Take Molly the dog in there. That should shake the coon up and convince him to move on.
Me: Nope. Last time I was out there, Molly and the two cats were snoozing by the stove. Oblivious.
Denise: Commiserates. She’s a country chick too.
Steve: Snappy decorator, bed and breakfast host: Water hose!
Me: Baby, it’s cold outside. Brrrrr. I suspect it would bother me more’n the coon.
Georgio: Famous truck farmer and winner of the North Little Rock mater contest last summer: Smoke him out! Bug spray him out! Bad parfum him out!
Me: Yeah. I got the parfum….this may work!
Nick-o: Age 4 going on 40, green is his favorite color: A net!
Sue G.: Former host of Oklahoma Gardening and present queen of extension: Shiny stuff! Wrap some peanut butter in foil, toss it outside. It will be irresistible to the beast.
Me: And to Molly dog the (normally) fussiest former starveling on the planet.
Martha: Garden Chick extraordinaire: You’re stuck. Coons are smart. He knows a warm place. Get rid of eats.
Me: But that’s where my cats keep warm and eat! Stupid cats.
Good Cousin Jane: Rap music! Hounds! And: You’re probably stuck. Coons love comfort.
Me: Who doesn’t?
And the best worst for last: More than one friend posited he may be a she in the family way, looking for the maternity ward. Help me.
Jan Meng2010-01-26T13:18:00+00:00