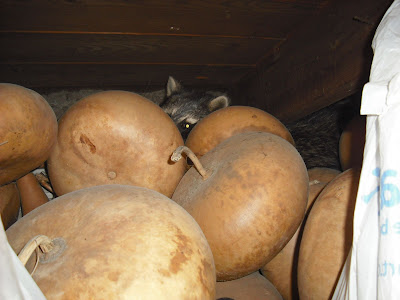 A raccoon got locked in my shop last night. It ain’t pretty. At first I thought it was gone, then I saw it huddled in the corner next to the front windows: bright eyed, looked young. Like a teenager, not a baby. I was whelmed over and came in the house for fortifying coffee and to give the poor creature some space to escape, and to put my haz-mat suit on.
I went back to my shop a few minutes ago. Looked around. It was gone, thank goodness. I put on my Honest Abe latex gloves (they’re really called that). And began. Goofy the cat had to come in and be everywhere my hands were. He’s such a smarty pants. He had his tail up and acted like he owns the place. Which he rather does. I have a big plastic garbage bag; some stuff is beyond salvageable. Details of the clean up would be in poor taste. I found my radio. Found the plug. It looks kinda chewed. Found NPR, which is not easy. In a previous coon encounter of the close kind, the station dial got smashed funny so the dial will turn like crazy and move but a milli-fraction of an inch.
I began. It was some kind of good luck the creature left.
MamaCat was hanging around now. The two cats were acting weirder than usual. I felt other eyes upon me. Slowly I turned, step by step (some of you will get that reference) and there the coon was: up among my gourds on a shelf that is away from the windows and escape. WHY did it go deeper in my shop? When I left the first time, I opened the windows, left the door wide open, but instead of leaving, it went further into trouble.
I opened every escape again. Came in the house with Molly the dog. The cats and coon will have to work it out. They do at night. I had a good head of steam going. Now I have to wait.
Jan Meng2010-01-25T15:35:00+00:00