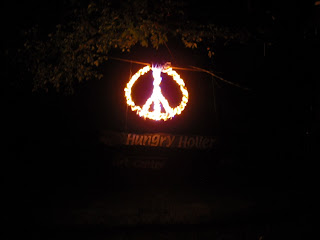 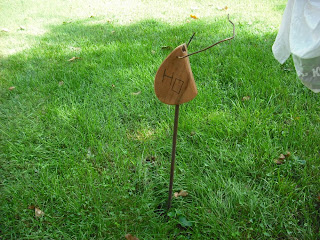 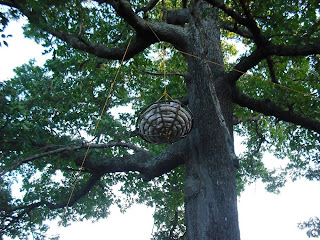 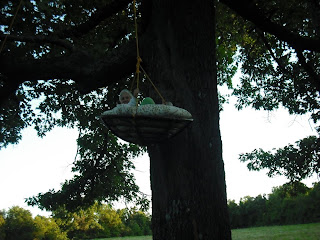 The ZSM stubbed his toe on an armadillo tonight after ride-about. I had just disembarked from the lawn barge, when Molly (the world’s fussiest former starveling) went nuts. The armadillo broke left, smack dab into one of the ZSM’s patrician-length toes. Bad words were few but powerful.

I called Sister Juls and Ma from my basket nest 30 feet up Colossus tonight. It’s the only place on the Holler where my cell phone works. The Spoonmaster has rigged me a cozy basket thing with multiple redundancies (is it redundant to say multiple redundancies?). Dang. I used to edit. When they asked where the ZSM was while I was up in the tree, I told them he was off in the Gourdhead Glen practicing his penny whistle. Which he really was.

He’s getting pretty darn good. We practice the spoons and then he practices the whistle. He’s first chair in the Holler Orchestra and wants to keep it that way. When Judd comes home from Afghanistan, we want our concert just for him to dazzle.

Goofy, the cat we adopted from the Humane Society, is a darling. And a quick study. He was born at the HS so he’s never been outside before. He’s entranced. Rain is novel and loud. Dust is fun. Birds are delicious. I had to stop using the old press equipment as birdfeeders. Goofy had a mortal lock on hiding places and managed to (mostly) devour a female cardinal, male goldfinch and a blue jay, if you can believe that. I don’t mind the occasional kill, but jeepers.

Got the peace sign re-worked. I ordered some special rope lights that look sorta neony. They’re LED and supposed to last a decade. When I went to re-work the sign I realized the leg lights were out because they WERE UNPLUGGED. Ahem. I put the new lights on anyway. Can’t have peace too bright.

Seems like there was something else to relate, but I can’t remember and if I don’t stop now, I may be tempted to stretch some truth or near truth. Heaven knows, you don’t get tall tales from the Holler.

Oh. The walking stick on the back screen door finally went home. Or someplace.

Oh2. Do you know how many times we’ve stepped in that drain hole for the fall out shelter/storm shelter? Gobs and so far with no permanent damage to ankle nor leg. But the ZSM took a bad tumble the other day whilst he was out hanging laundry on the line. He paused (again), wondered if he was in one piece, determined he was and then he made a vow: he was going to put up a sign to remind us after all these years, that there’s hole there where the shelter pump drains out.