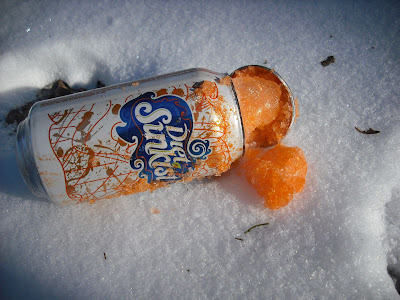 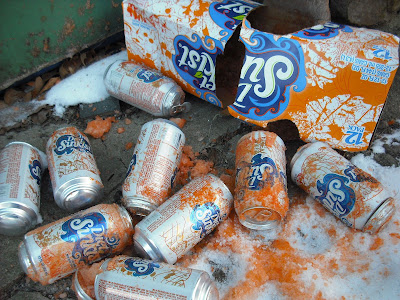 Having been Holler-bound for about a week, it was time to head out into the world and make a run to the green boxes which is what we call dumpsters. Great program: rural Delaware County doesn’t have residential trash pick up. Through out the county there are dumpster stops. Residents who may have previously dumped their trash in the nearest holler or backwoods have a green alternative in the county-provided dumpsters. Hardcore dimwits sentimentally continue to dump in plein air, but a bunch don’t any more.

I digress.
So I open the rear hatch on my van and am fairly blinded by orange sparkling glass. Y’all know I’m forever hauling broken glass and pottery and all manner of goofy stuff around, so for a brief minute I was taken by the beauty of it all. Damn, it was smart to cart all the broken orange bits of glass home. Being eventually very astute, it occurred to me that glass doesn’t stick on windows nor interior van walls nor on the interior roof, not to mention I hadn’t scored any gorgeous orange glass.
I had an epiphany: it wasn’t glass.
Last time I went to town for provisions it was dang cold. Too dang cold to make multiple trips outside to haul from the van bags of sunflower seeds, dog food and cat food. Nor the carton of my drug of choice diet Sunkist orange. Be warned: diet Sunkist orange cans are wimpy and do not withstand near sub-freezing temps even if they are inside a really clean van which is parked in a fully-enclosed rock garage. Pit Bull beer cans do, but that’s probably alcohol chemistry.
As pretty as it was, it was ugly-waiting-to-happen as soon as it warmed up. I’m lizard-like in my need for warmth and in the winter my van is a rolling sauna. I had to stop the forward motion I had going and clean out my van while the mess was still hard and sparkly and relatively unsticky. I was in such a frenzy, I neglected to get photos of the van interior. But here’re some photos of the aftermath. Add imagination and you’ll get the picture.
Three cans survived. A couple were ticking time bombs and I left them out there in the snow. I just heard one go off. Seriously. I did. And now I’m jonesing for an orange hit.