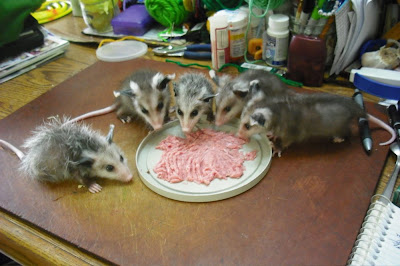 DINING IN THE ROUND IN THEIR BEST BIB AND TUCKER 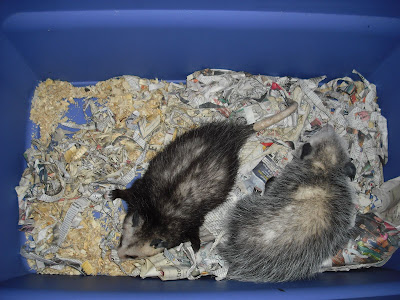 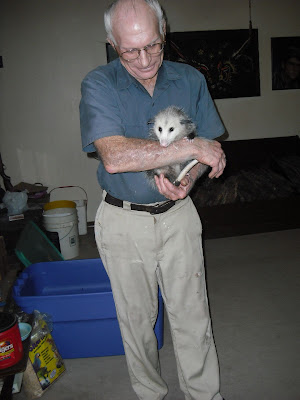 Honoring popular demand inside my head and out, I went over to St. Colleen and Chuck’s house this afternoon to see how the possums are doing. If y’all recall, Colleen and Chuck were having coffee one June morning and noticed a possum sleeping in the yard. The possum was not sleeping, nor playing possum. She was really truly dead. Her 6 pouch babies were not. Soft-hearted C&C gathered them up and embarked upon the possum path. Possums are notoriously difficult to raise from infants. Possum milk is as mysterious as alchemy, and as a result, 5 babies lived but they suffered from rickets. A formula adjustment helped most of them get pretty much over the rickets. Four lived. Three were healthy. One is ever gimpy. Two were males. Upon adolescence they were escorted to lake front property on Lake Spavinaw and released. Anyone who has lived intimately with teenage boys of any species will understand this. Two females, Baby and Tippy remain. Guess which one is gimpy?
Baby is affectionate and nosy. She knows her name. Her favorite place is Chuck’s lap. She’s been known to crawl up his pant leg. Her fur is grey and soft. Tippy is pretty much happy laying around, waving her paws, groovin’ to the possum music in her head. They sleep during the day in a box, a corner of which serves as the possum potty. They are clean as whistles; have absolutely no odor. Baby has a wet and curious nose. Roger, the friendly highway patrolman found out Baby can hang in classic possum repose with her tail wrapped around a shotgun barrel. I had long suspected that tail hanging was a myth but now we all know it isn’t.
They eat cat food and all sorts of meat, vegetables and fruit. They are loved and contented as clams.
Jan Meng2010-01-07T01:32:00+00:00