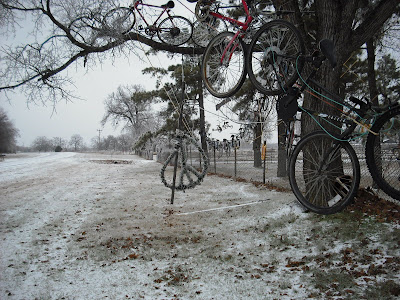 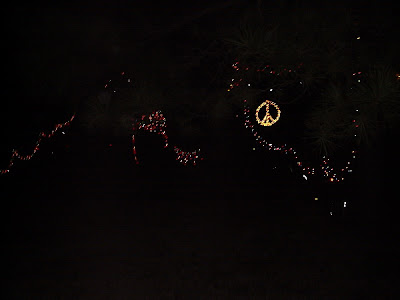 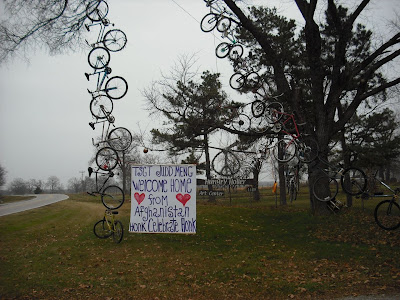 We’ve had it out front among the bicycles for years. It’s survived strong winds, snow, ice incasement, blistering hot sun. When you consider the entire symbol is based upon two hoola hoops, its longevity is pretty astounding. Every night it glows peacefully. When I’m coming home late, I get a little boost when I see it down the highway, hanging from the big elm tree, reflectors from scores of surrounding bicycles glint like animal eyes in the dark. When Judd was in Afghanistan it helped us keep the faith. Most folks feel affection for it. But from time to time someone will describe it as the great American chicken foot. The most recent being a self-described Vietnam vet. He was red-faced and had the aura of someone who suffers. Poor fella. Soldiers who have endured war understand the preciousness of peace. Or they don’t. Just like the rest of us, I guess.
When I first wired the two hoops together, I wrapped the thing in Christmas lights. They eventually burned out. There was no way I was gonna unwrap those suckers, so the next lights went around the early strings. I’ve done this many times over the years. I started using rope lights a few years ago. The sign got smaller on the inside as light layers built up, larger on the outside edges for the same reason.
The fairly unimpressive icy precip of this latest winter weather was none-the-less too much for the Peace Sign. It let loose and collapsed on itself, sorta pumpkin-in-late-November-like. One thing living close to Nature teaches you, is that everything has a life span. So the Peace Sign is dead, Long live the Peace Sign.
LeighAnn at B&L Feed in Jay, America turned me onto Art in Little Kansas. Art has the best collection of stuff round I ever saw. Wheels of old farm equipment and I don’t know what else. We’re going BIG Peace Sign this time. I have my eye on a wheel that’s 10-12 feet across. It’s heavy but I don’t think it’s much heavier than two hoola hoops covered in multiple layers of lights. Seriously. No wonder the hoops gave up. But Hungry Holler Peace will rise again. I’ll keep y’all apprised.
secret code: TSCUZUPZQ7PY 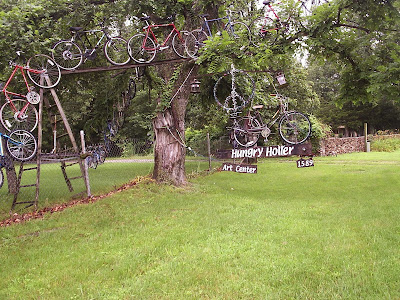