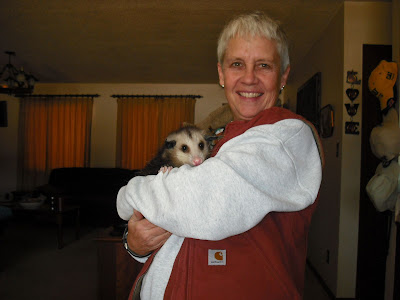 It’s a sad state of affairs when a gimpy possum is cuter’n you are…. 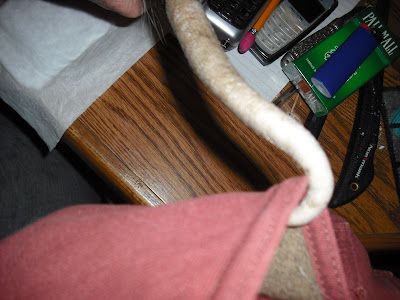 Tippy’s tail in my pocket 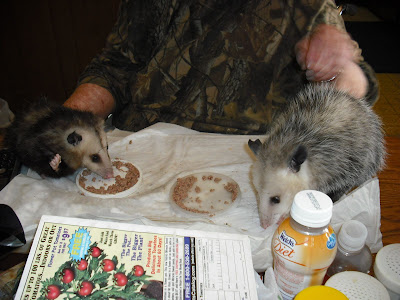 OK, by popular demand (my baby Seester) here’s more about Tippy the Gimpy Possum. She loves to be held. So does Baby but with Tippy it’s also more necessary. When she eats (and boy does she eat) her “hands” wave constantly. You can kinda see that in the photo. Her tail works fine. When I was holding her, her tail snaked into my pocket and it wasn’t easy to get it out and I have no idea what it was holding onto in there. I think the pocket was empty except for the seams.
Chuck and Colleen (the possum foster parents) told me last night they surprised two bears in their back yard!!!! They’ve seen one before. I think the mystery of what happened to the dead deer I found by our well house has been solved. Did I tell y’all about the deer? She was gorgeous. Not a mark on her except for a small cut near the hoof on one front leg. She was dead as a doornail, though, poor thing. It was so damn cold. She was frozen. I was going to tell Chuck about it. She was on his side of the fence. I spaced it. The next morning I went to check on her and she was GONE. No blood. No fur. No obvious rooting around. Just GONE. We figger now the bears hauled her off. Nature wastes not much.